Poppy is NINE months old (plus a few days) 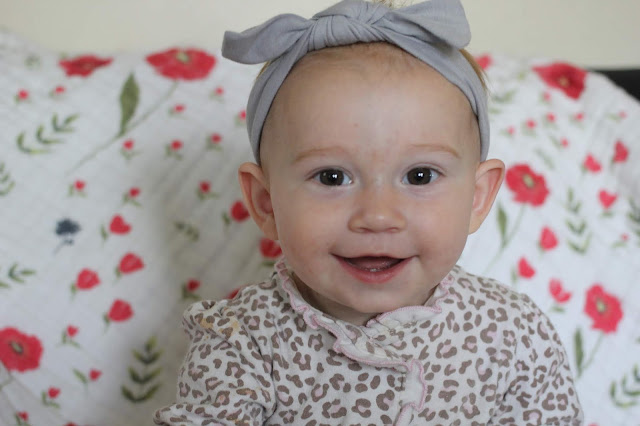 I didn't write a post for Poppy's eight month milestone. I started it, and never finished. I started the post one day after we took her to her pediatrician and one day before we took her to the ER where we found out she was in heart failure.

Since Poppy's surgery (exactly five weeks ago, today) she has been thriving. All of the milestones which seemed to regress before we got her true diagnosis, have come back with all their glory. Poppy is rolling, scooting, eating solids, laughing, and full of life. As I write this I feel the tears welling up in my eyes. We were so close to losing our girl. It feels like a bad dream from which we woke, only to find that it was real...but she's okay. She's a tiny little miracle baby. 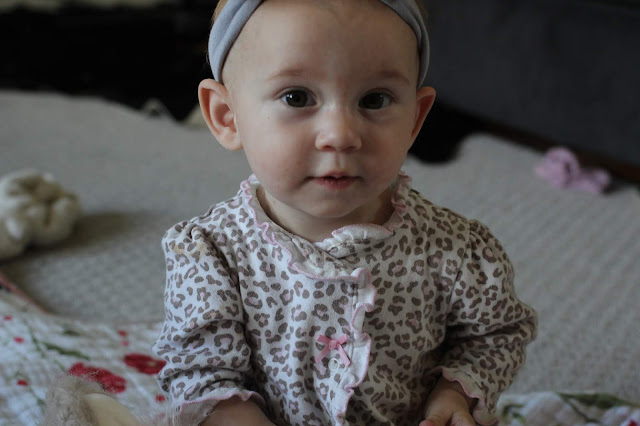 Two weeks ago I decided to put her in her crib (for the first time ever!). The first two nights she slept longer than she has ever slept before. I, of course, was terrified and checked on her about ten times. Since then, she sleeps about three to four hour stretches in her crib. When she wakes up crying, I feed her and put her back in her crib.

She loves eating pureed pears, bananas, and whole strawberries. She eats her solid food three times a day, and nurses right after. She has two teeth on the bottom and I think I can see a third making it's way through! She bites me all the time, and I have yelped in pain more times than I care to admit.

She still LOVES music, and calms down whenever she hears me sing. She also actively dances to music, and can't sit still when she hears it. She also loves rap- a baby after my own heart (swoon) I can't believe how strong and confident she's becoming.

Poppy is trying very hard to stand up on her own, pull herself up, and crawl...baby girls isn't there quite yet, but she is SUPER close. (insert sigh here...) Her scar from heart surgery is healing, and everyday I kiss it and tell her how beautiful it is. I hope one day she sees the beauty in her little zipper, too.

I can't wait to see what this month will bring- maybe she'll even begin to fit into her nine month clothes!?!? One can hope. 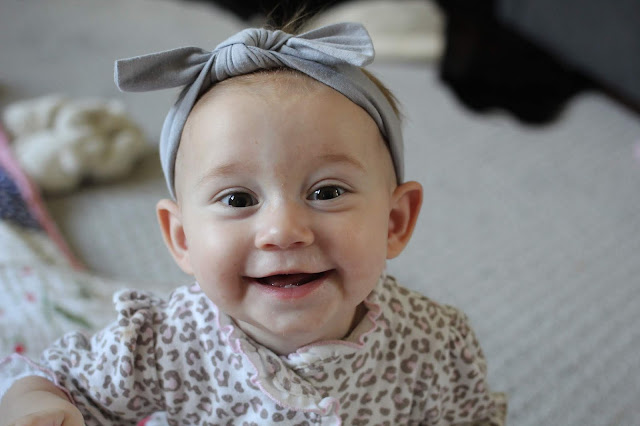 It made me quite overwhelmed to re-read it...knowing what I know now. The unfinished eight month post went like this...

"Sweet Poppy is eight months old. I wish I could say that thins are AMAZING with her growth and development thus far, but they are not.

A couple of weeks ago, Poppy had her well check. She was weighed and given a vaccine. She came home and didn't feel so great. I have been trying to feed her baby food- purees, but she hasn't been eating them. At all. When we got home from the well check, I tried to feed her some whole wheat cereal and she threw up immediately. From then on, she's been throwing up most of the time I get a few bites of food in her.

Her color had started to change a bit, she started to feel weaker, and definitely was doing less activity than she had been doing in the previous few weeks. The other night, when I picked her up, I started to cry. She felt so skinny. So weak. Her body was feeling floppy and less strong.

We took her to the doctor yesterday and discovered that she has lost one full pound in two weeks. For a baby who is already on the small side (5%tile) a one pound weight loss is HUGE. Her doctor ran lab tests and her blood work showed that she was very anemic.

We have an answer to our baby's sudden decrease in strength, her coloring, her quick/rapid breaths, and hopefully her weight loss. She will start taking an iron supplement and her doctor would like me to supplement her diet with some formula."