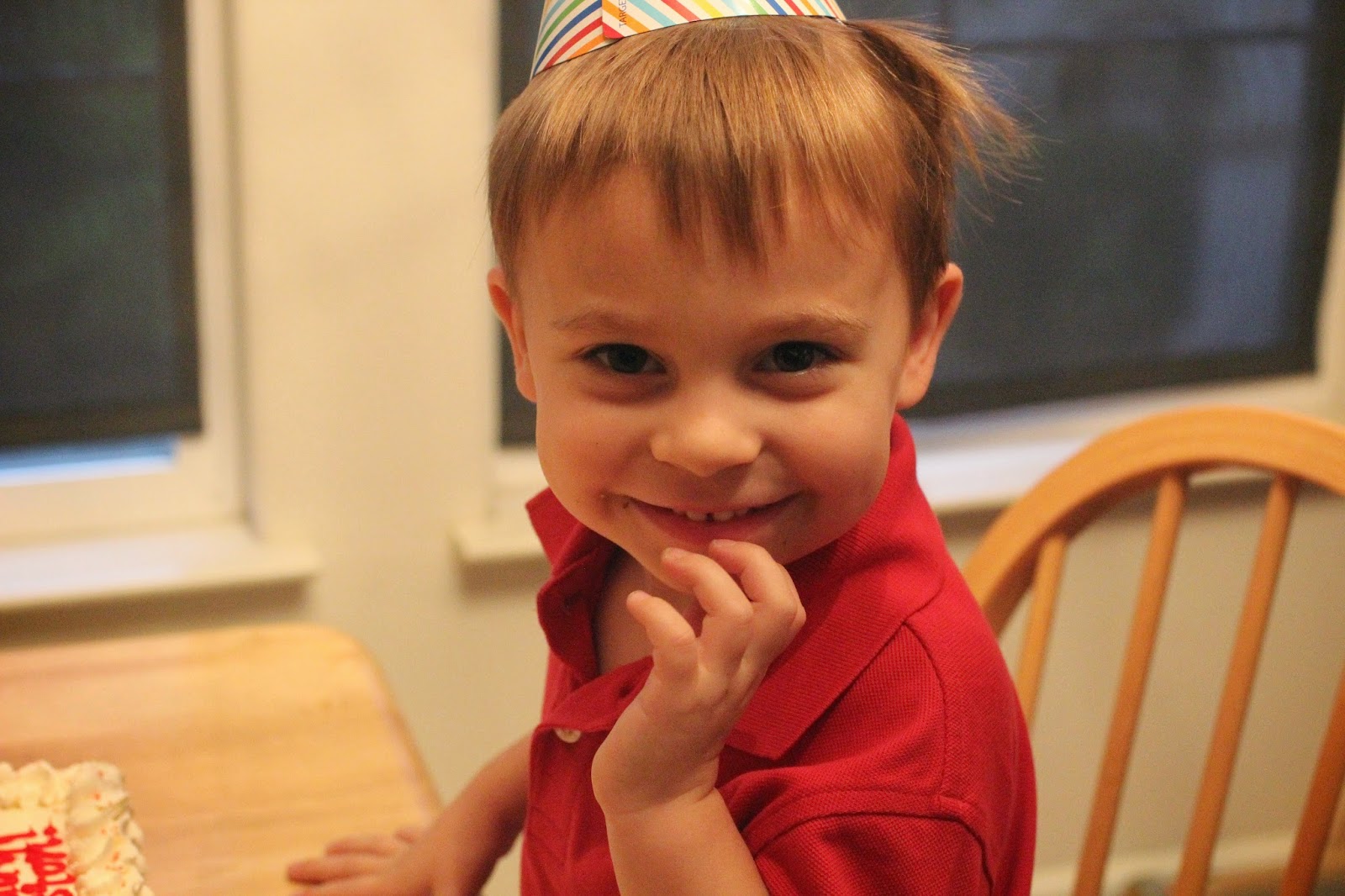 our goofy little guy turned three years old this week. easton is sensitive, considerate, kind, finicky, picky, a clean freak, and full of funny energy. he chooses one thing a week to be totally obsessed with and takes whatever that thing is, everywhere. right now it's his "pony" that he got from christine, cara, and baby dave. he hasn't put it down since he opened it at his birthday party.

he likes "biscketie" (spaghetti), grapes, and apple sauce (and that's about it this week), he loves jumpy houses, scooters, and trains. his favorite show is strawberry shortcake and "project" (which is actually a program on baby first tv that i totally don't know the name of anymore). he is like rain-man with puzzles and is up to 48 pieces. he likes homemade apple juice, strawberry and spinach juice, and loves to eat carrots "like a bunny."

"look mama, it's a helicopterine!!" (a combination between helicopter and submarine, i suppose)
"mama, where's doe-doe?" (his little imaginary pal, who he never sees but always asks where she is. it's a she, for sure. he says so.)
"are the kids' sleeping?" (he wants to make sure other kids are going to sleep too)
"mama, are the kids awake?" (first thing in the morning)
"where are the cars going?"
"are there kids in the cars"
"look mama, the moon!!!"
"i can't see the moon"
"the moon is half full today" (there's a lot of moon talk going on)
""no sailor-boy, don't slime my toy!!!!"
"sailor slllliiiiiimmmmmmeeeee"
"shh shh shh, sailor-boy. it's okay"
"mama, sailor-boy's sleeping" (whenever sailor falls asleep in the car)
"i personally like it."
"karen, your garage is very messy"
"there is dust in your bathtub, you need to clean it."
"mama, the table is dirty- you need to clean it" (thanks so much, easton.)
"i'm going to make doe doe for dinner." (he also likes to eat his imaginary friend)
"mama, i love you" (my personal favorite)
"i'm going to my meeting"

on his actual birthday i woke him up with a balloon in hand to get him really excited about his big birthday. we had cake with family and gave him a chuggington train track set which he had been asking for for about two months. it was a great day with lots of laughter and excitement. easton brings so much joy into our lives. he is such a gift. 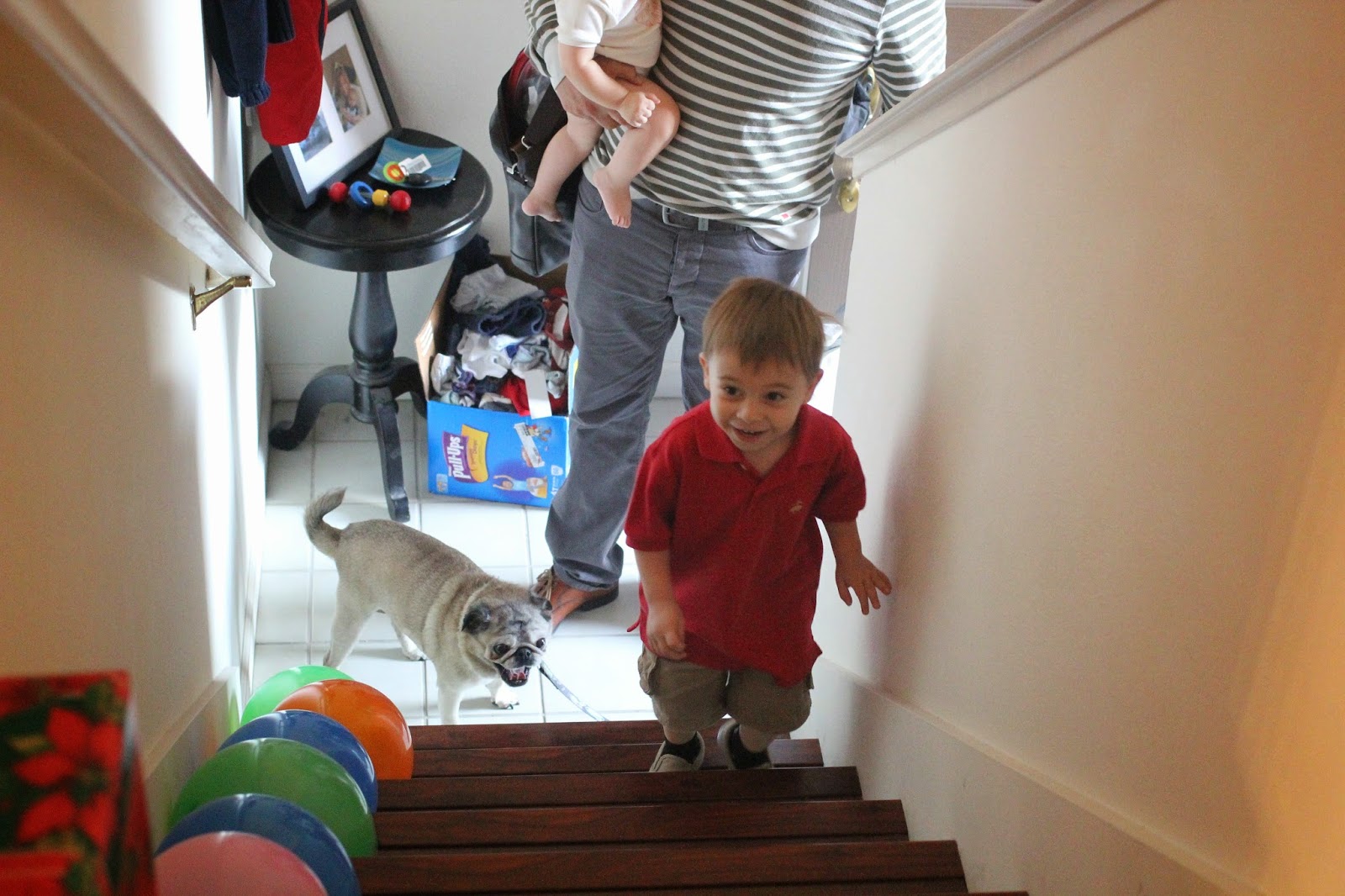 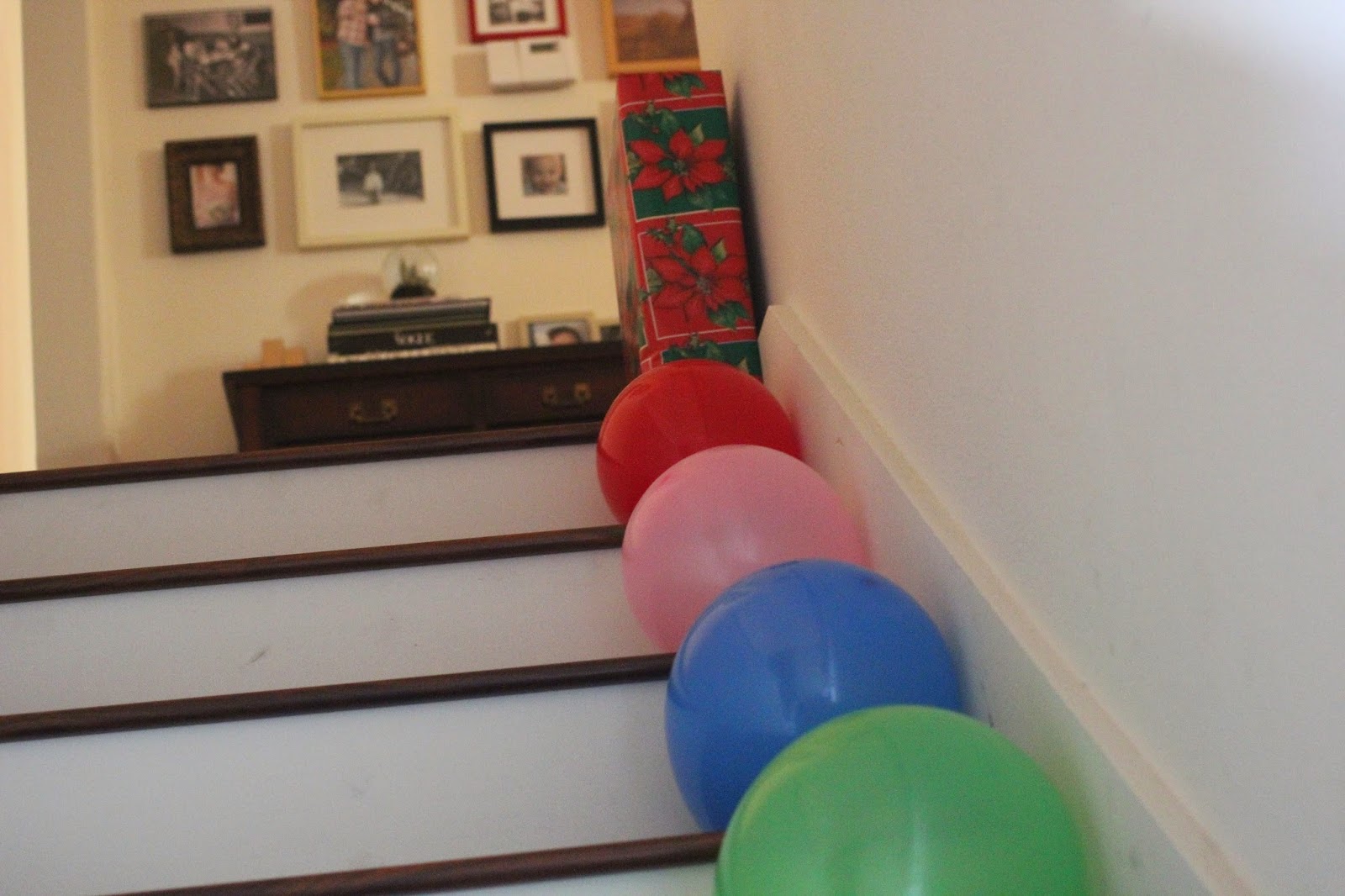 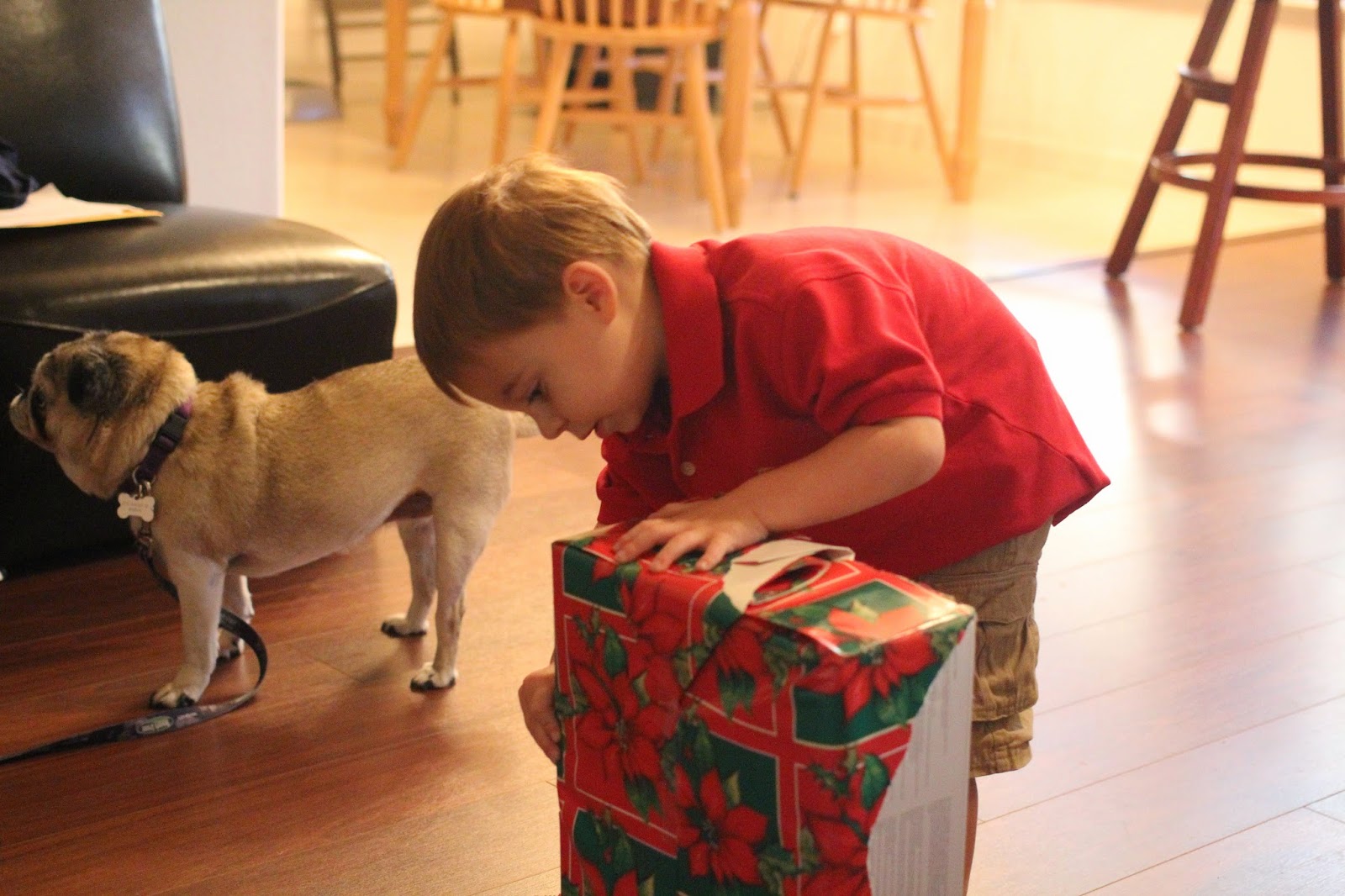 Above, you'll notice christmas wrapping paper. sometimes i feel so unprepared….whatever- he didn't know the dif. 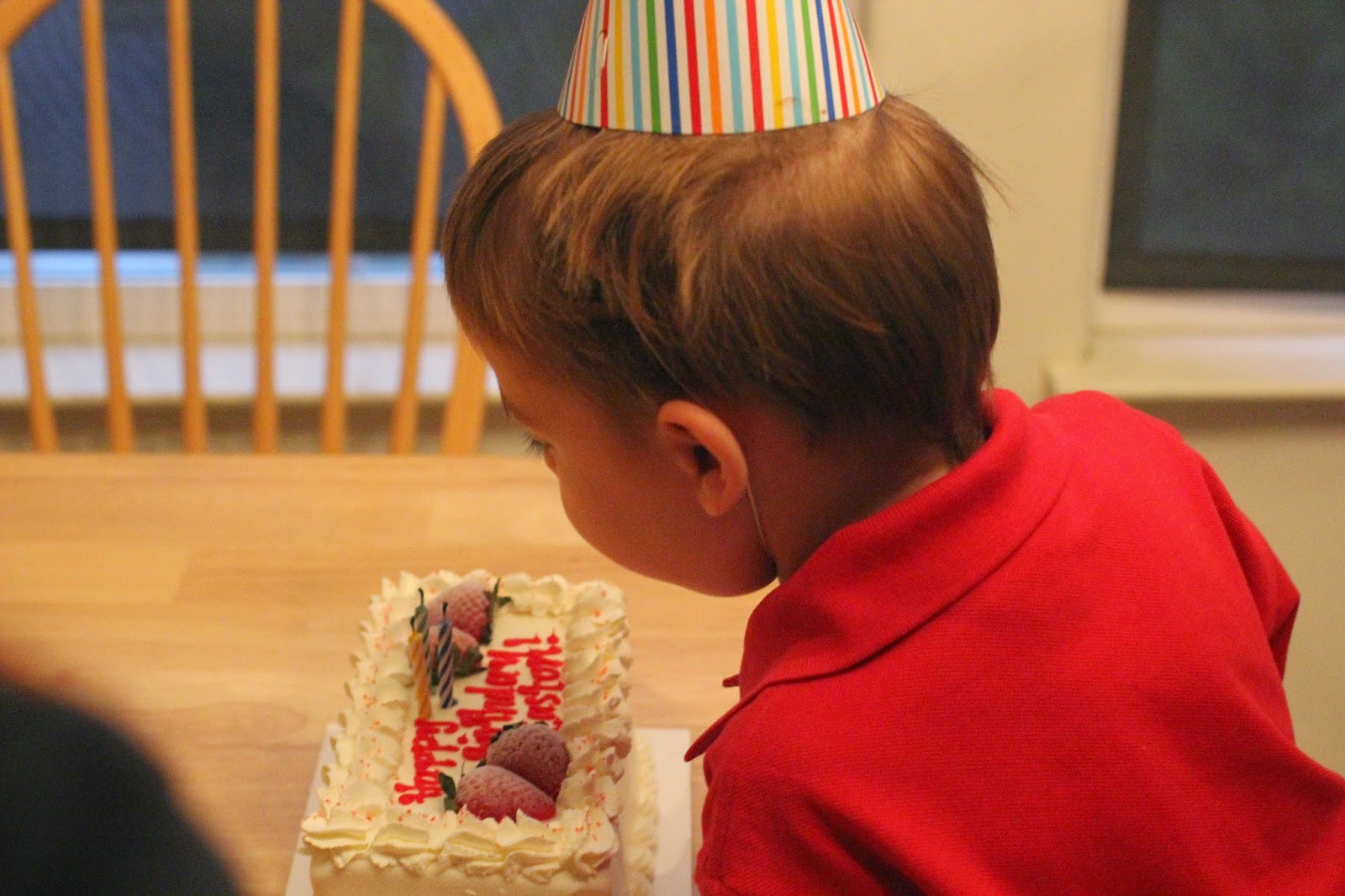 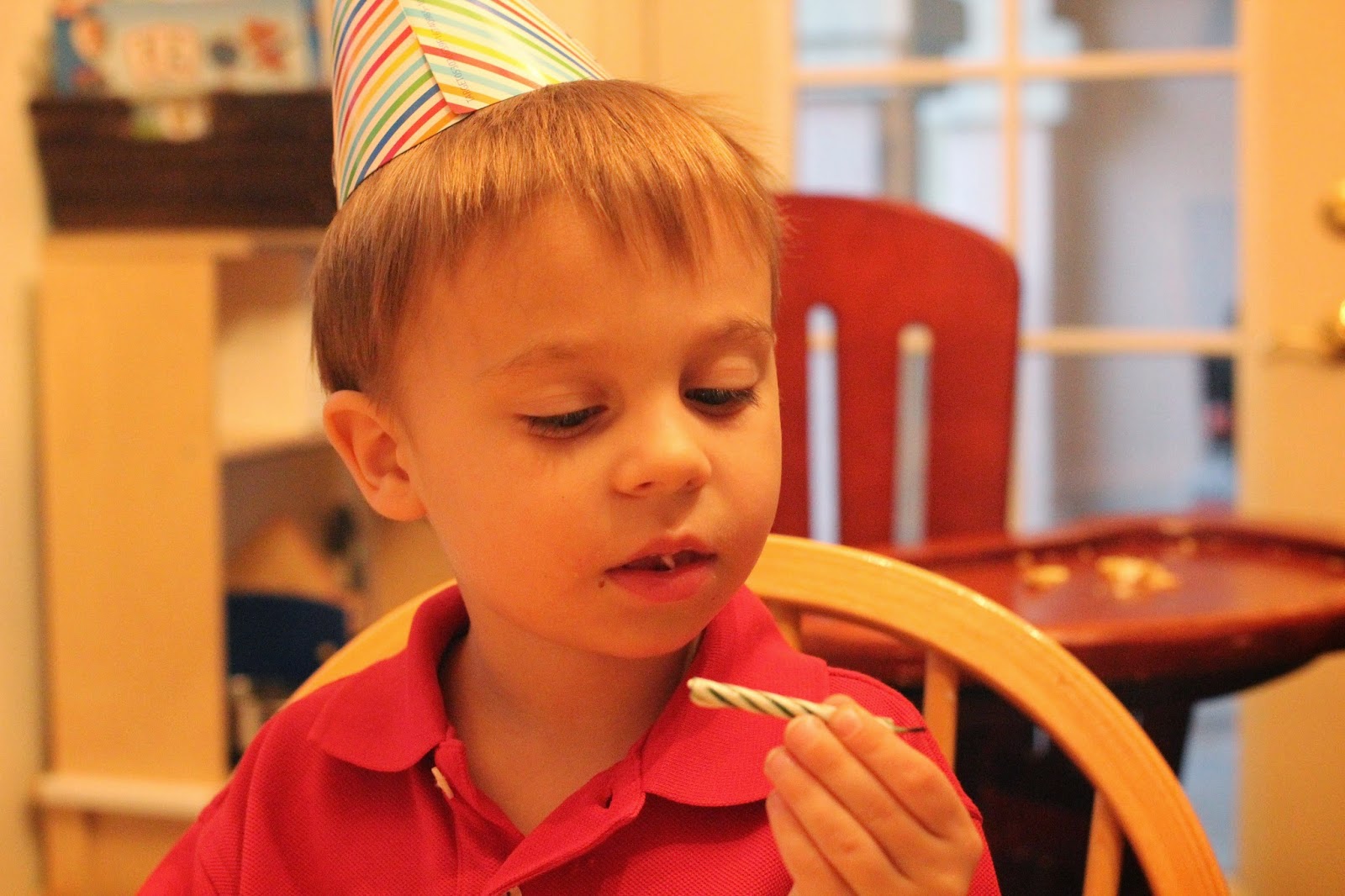 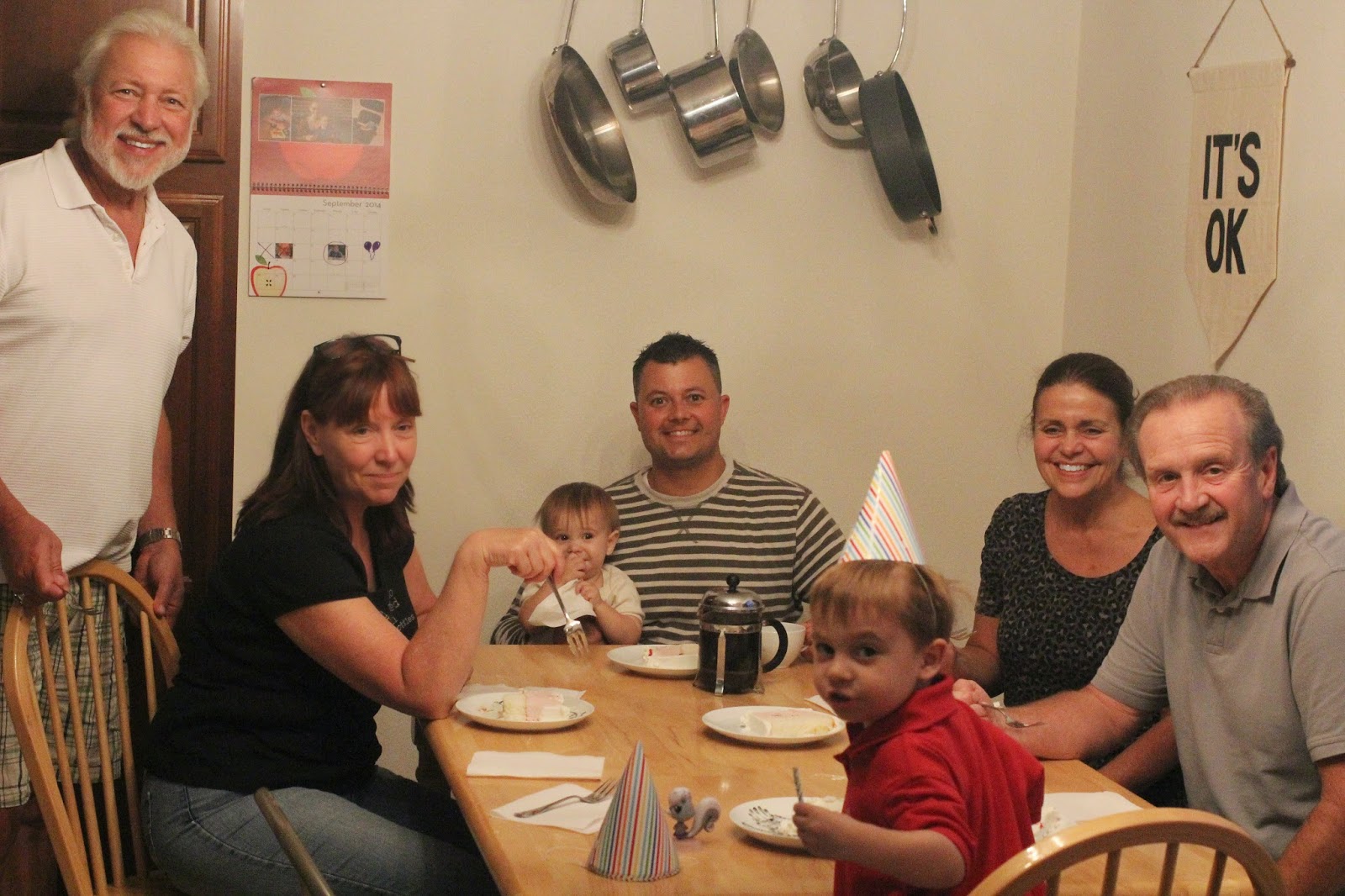 easton ate his cake with the bottom of the candle. so goofy. 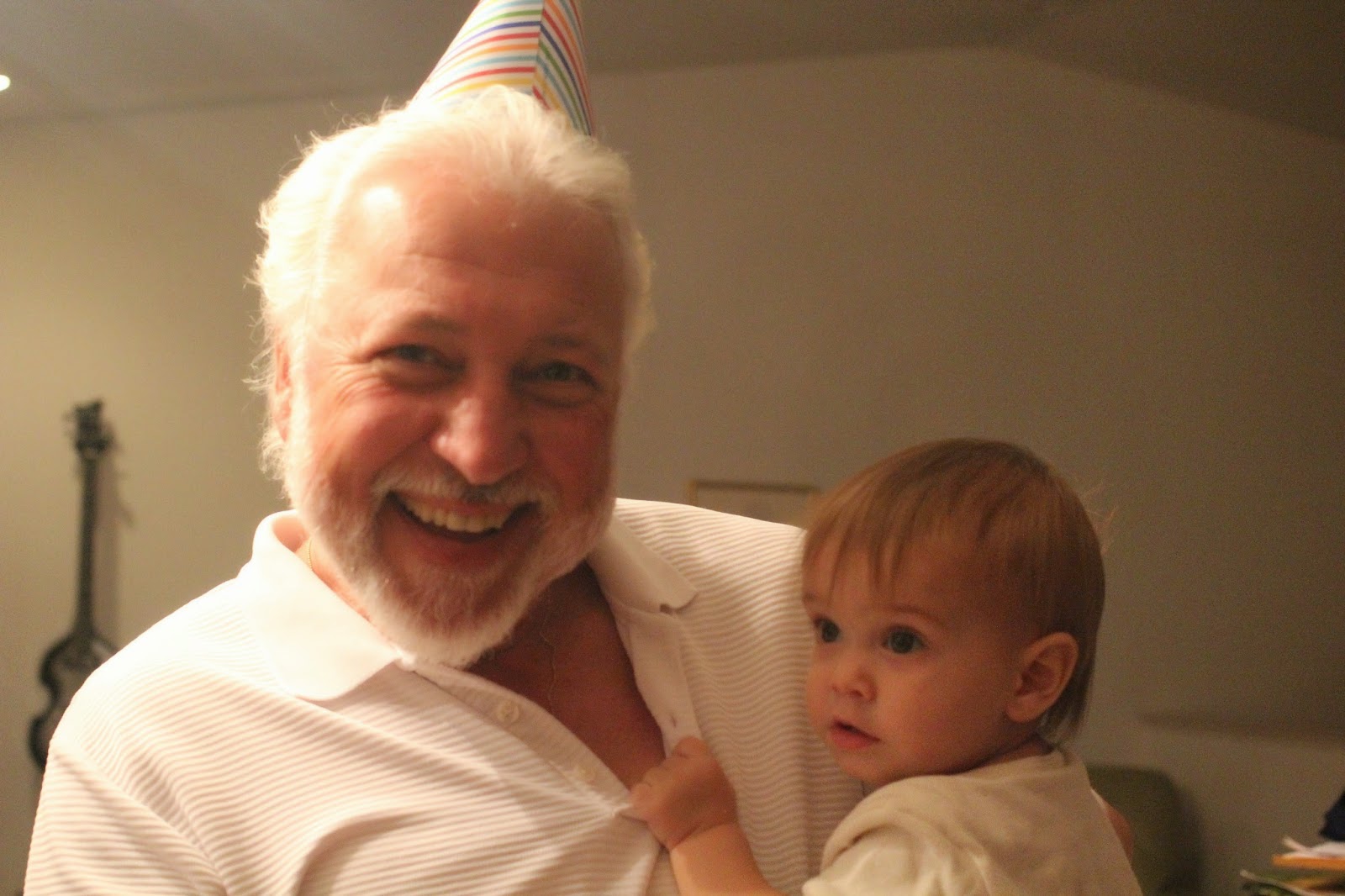 we are a birthday hat kinda family. 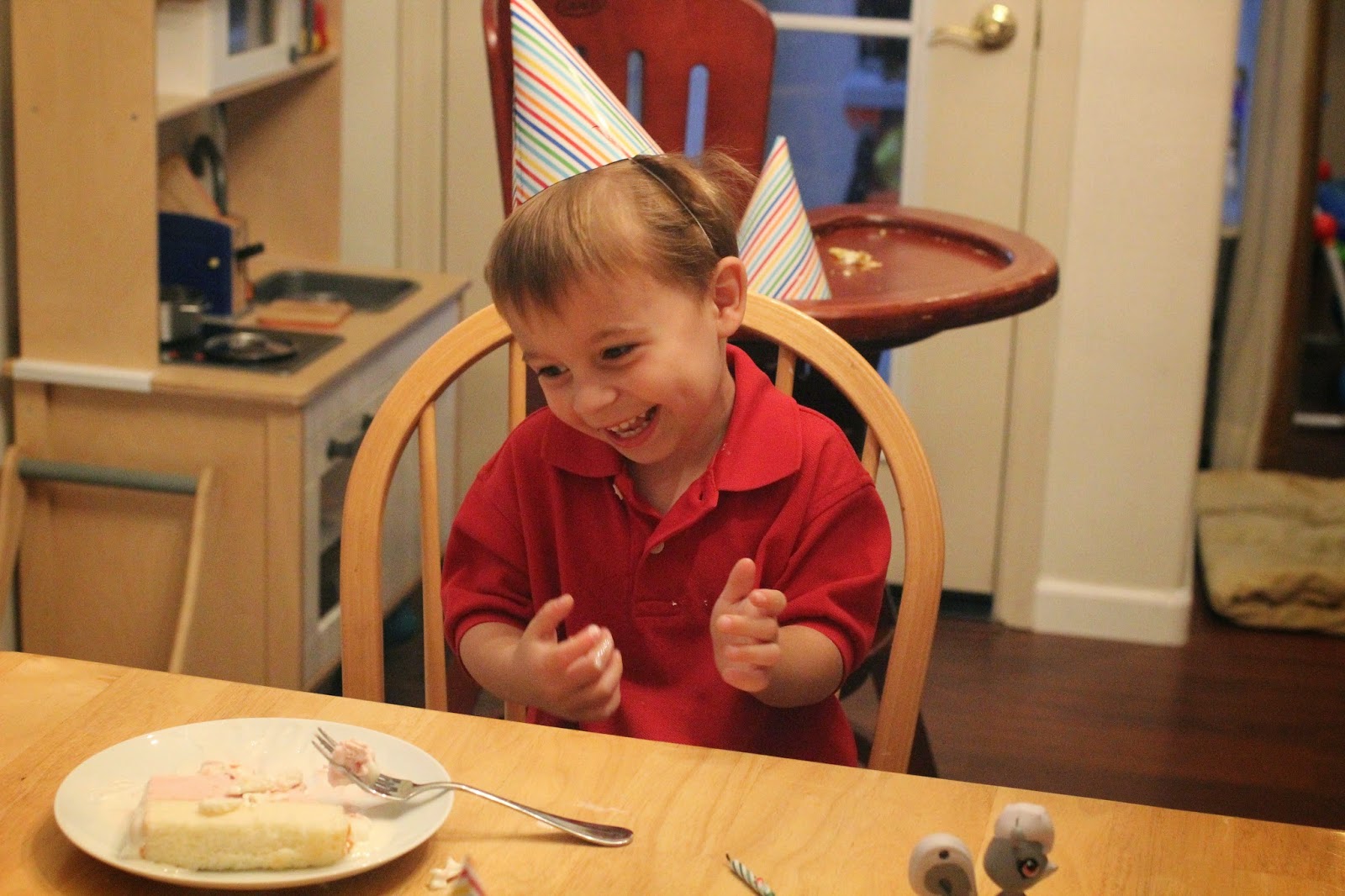 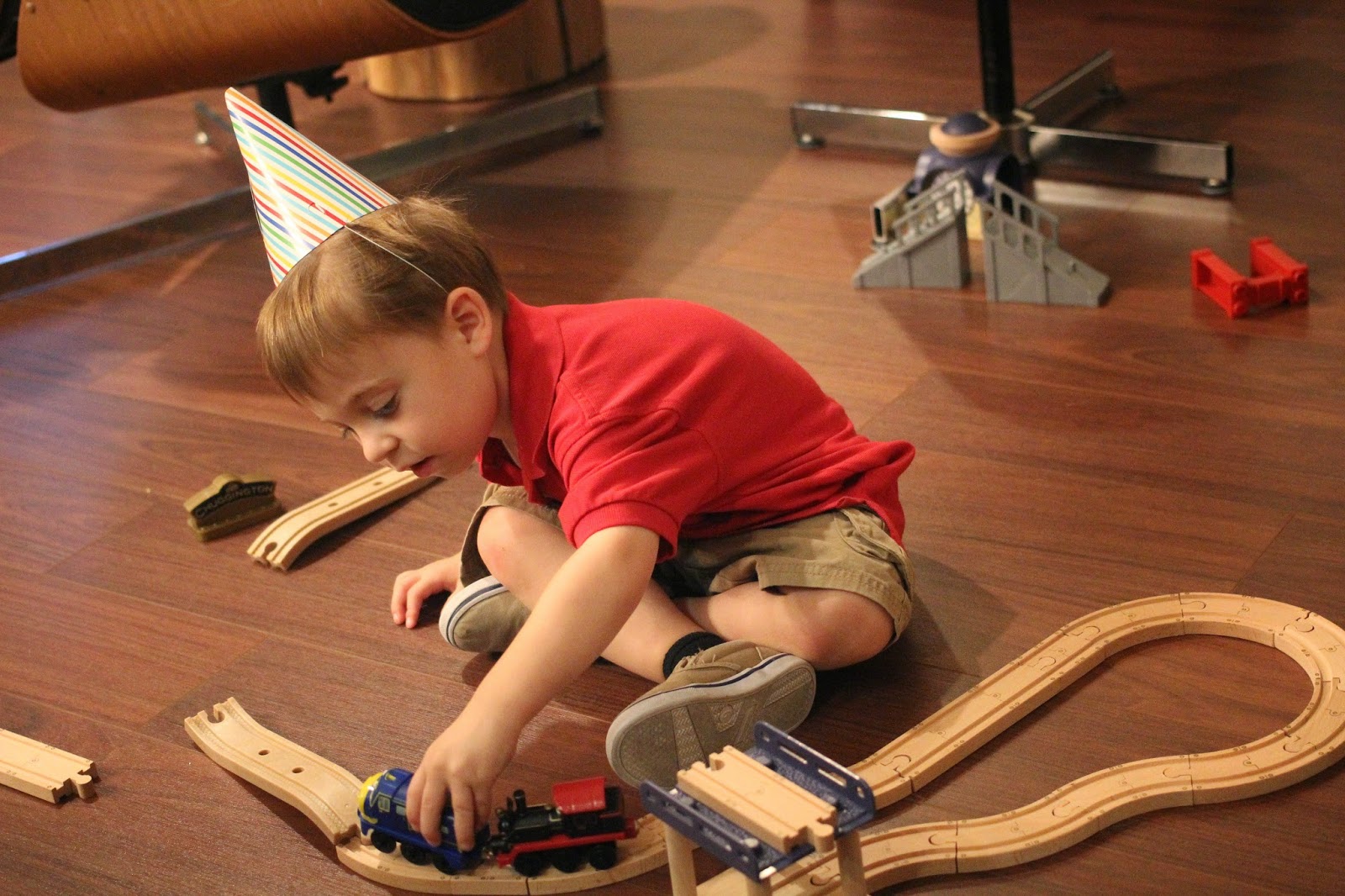