mama to a one month old (and toddler!)

baby sailor turned one month old yesterday. needless to say, this has been an incredible month. 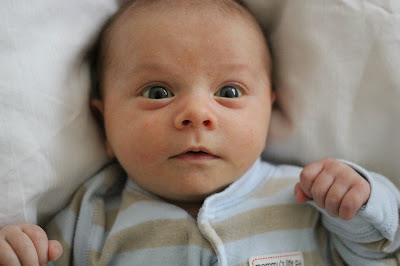 i have to admit- i was extremely nervous for tony to go back to work (he stayed home for two weeks and two days on paternity leave). i was concerned that i just couldn't do it; couldn't be a good mother to two little ones. but tony did go back eventually- and i am just fine.

easton goes to day care with his beloved donna (my babysitter when i was young) two days a week. he loves donna and easton's time away gives baby sailor and i some alone time.

sailor is a really really strong little guy. stronger than any baby i've ever met. he rolled over (i have witnesses) when he was just under three weeks old. he rolled from tummy to back while he was relaxing on our comfy chair. that was a crazy sight.

sailor is a really good eater and has been since the day he was born. i'm so thankful that nursing again has been smooth and easy. he has been making lots of eye contact in the last couple of days and he seems to stay awake for longer periods of time during the day. sailor eyes still look blue- but we'll see. easton's changed to a light brown around three months.

he hates to be put down- he seriously wants to be held all. the. time. but he is a baby after all. i've started wearing him in the baby carrier inside the house so i can get dishes done and anything else that has to be done around the house. 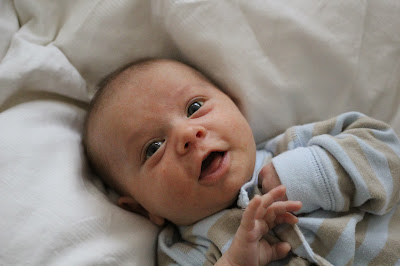 we put sailor to sleep in his car seat right now because he will not go to sleep on his back or side in the bassinet. last night we ended up bringing the carseat in between us on the bed. he became so fussy whenever my hands weren't on him that i wasn't able to get any sleep until i brought him on the bed. he usually gets fussy around 10pm and i have a hard time getting him to calm down on his own (meaning not in my arms) until around midnight. so that makes me quite sleepy (and grumpy).

i am a lot less tired than i thought i would be and i owe that mostly to my husband and toddler. easton sleeps well at night all the time now and tony is such a help (even waking in the middle of the night to change sailor when i ask him too). sailor usually wakes up twice. once around 2:30 and once around 4:30.

it's been fun so far- i can't wait to see what month two will bring! if you're interested in comparing the two boys- easton's one month post is here! 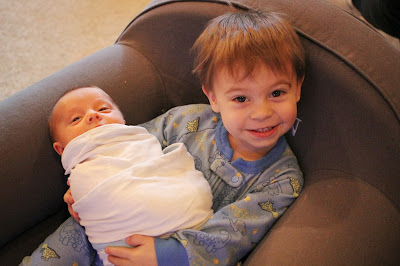