I've been a little pre-occupied with planning Easton's first birthday party the last couple of weeks. This party is essentially the size of a small wedding with tiny little details coming out of my...ears. But, in the midst of all the planning madness and in between errands, my little one year old took his FIRST STEP!!

I was on the phone with someone from Joanne's Fabric (getting a stock check, for yet another birthday party prop), when it happened. The guy on the other end of the phone probably thought I was nuts...I yelled, "OH MY GOODNESS, my baby just took his first step!!!!! So, do you think you have those letters in stock?..." Always the shopper, I am.

He did it a few times; the blurriness of the photo proves that he's in motion! On his third go of it, he took two steps in a row before he fell.  I'm so excited! My baby really is [almost] a toddler! 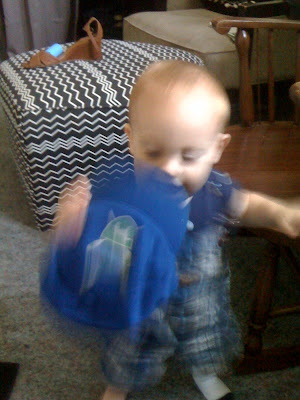 Baby steps, they are so much cuter than regular sized people steps... take ma word for it.
Posted by red hippo at 1:58 PM