Easton is more like 10.5 months now!! (It's been a really really busy month, so I'm just getting around to this post now). Baby E is doing all sorts of tricks. He just can't contain all his energy in that little body of his. I am definitely a mom to a BOY. This baby boy is rambunctious and challenging. Challenging but amazing. I feel grateful every day that my little guy has the physical ability to be active, there are so many babies who don't. His rambunctious behavior is a sign that he is growing and THRIVING. Thank, God. 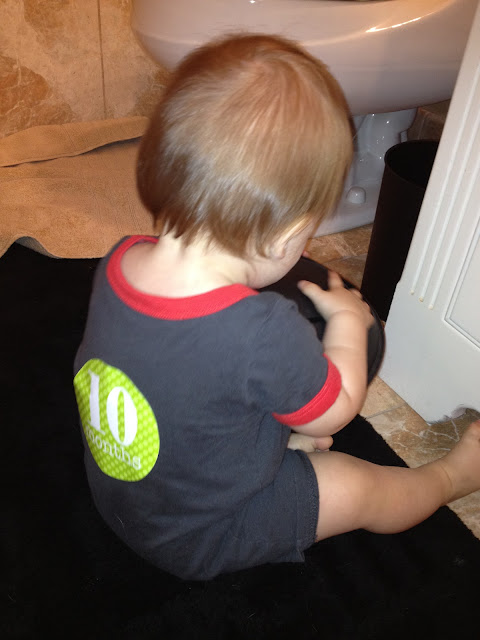 Here are 10 tidbits about my little Easton in his 10th month of life!

1. He absolutely HATES getting his diaper changed or getting dressed. I think it's because he has gotten so active and anytime he needs a change, he forced to stay still. He wants to be free!!!

2. He LOVES nursing. Just when I am getting ready to start the process of weening this baby, he has started to WANT to nurse all the time. C'est la vie.

3. He HATES getting into the car seat. I believe it's for the same reason as #1. I think he'd rather be crawling, wiggling, and moving around. 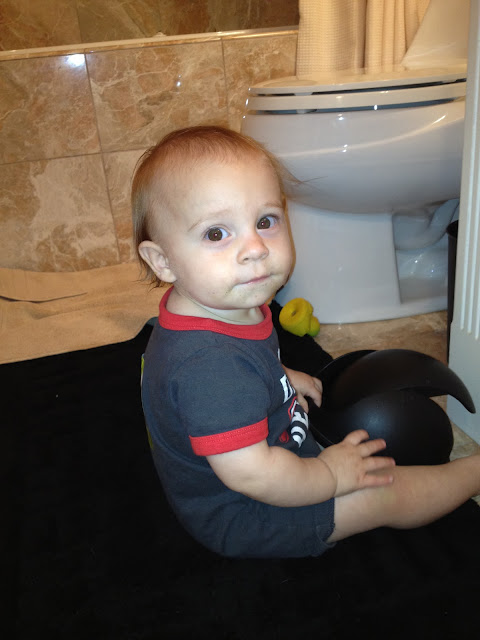 4. He doesn't enjoy grass. I took him to the park a couple of weeks ago and couldn't understand why he wasn't crawling his little tail off. All of a sudden it occurred to my friend and I that he didn't like the feeling of grass. Low and behold, he was trying to lift his hands and knees off of the grass at the same time- trying not to touch it. It was actually, pretty cute. (I don't like grass either!!)

5. He isn't a very big eater. I've been encouraging Easton to eat on his own a lot more lately (as opposed to spoon feeding) and he gets "over-it" pretty quickly. Luckily, everything I put in front of him is healthy, so he's getting all the nutrients he needs.

6. He has started to pull himself up! He even walks a little bit while holding on to things like an ottoman and the couch. This started a little bit after he turned 10 months.

7. Easton really likes old men. I don't know what this is about- but wherever we go, he always finds the oldest guy around and gives him a HUGE smile. Honestly, he won't take his little eyes off of the old guy until we're out of sight. It's really cute.

8. He has started to get a little fussy. For the first three months of Easton's life, he had colic- so he cried a lot. Once he hit four months, it was like he forgot how to cry. He NEVER cried. Now, well, it's a different story. He gets a little more fussy. Maybe it's because he has more of a "say" in what he's up to. I think he just wants what he wants, when he wants it. Makes sense.

9. He crawls with (what we affectionately call) a peg leg. It's actually very smart. He puts his foot down on one side and uses his knee on the other side. It gives him more momentum, so he can really get around quite quickly. My little baby genius. :) 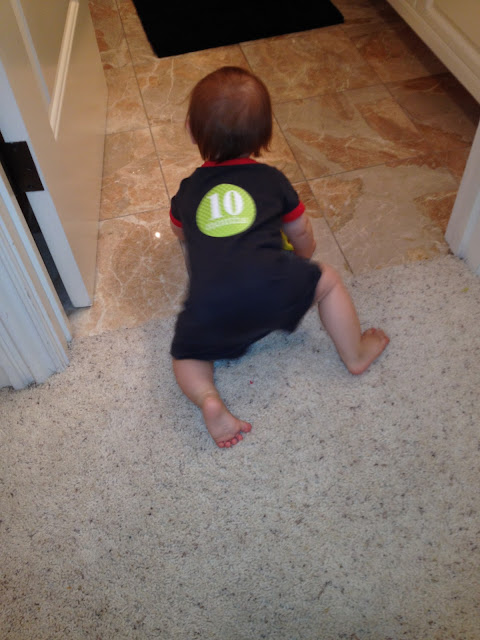 10. He still has that "light-hearted," good natured spirit, that he has always had. He really is a very delightful baby. I'm not just saying that because I'm his mama. People stop us [almost] wherever we go to compliment us on what a happy and content baby we have. That, my friends...that is pretty cool!

*I had to put his 10 month sticker on his back, because it's really hard to get him to stay still for a front picture- he just won't be pinned down.
Posted by red hippo at 4:22 PM