I wouldn't say that I'm the most competitive person in the world. But, when Tony starts doing seven mile runs out of no where....mama gets a little competitive. I'm pretty fit, but I really have a hard time with running. I think it's the boobs. :) 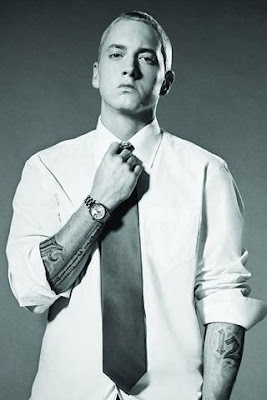 Anyhoooooo, I've been running twice a week on the track in  ma town. Last night I did two and a half miles, which doesn't sound like much but it's a work in progress. I was listening to good ol' Pandora  during my run and the song Airplanes by B.O.B featuring Eminem came on. I don't know why, but it really got me goin. Eminem has that effect on me. His music is pretty bad a*s. Maybe there's something to "anger" that motivates me (Hmmmm....). I did an extra half a mile because of that guy....I think my new workout station on Pandora will be Eminem Radio. That, and Jay Z Radio. Those two, they really know how to spit (aka, rap).

What station do you listen to on Pandora? What's your favorite song to workout to? Tony loves Radio Head during his workouts!!

Another song, that I love.

Thast funny! I only listen to country on the radio but when I go running I always listen to eminem and jay z! I throw in some beyonce and rhianna too. That music always gets me going!!! Good luck with running. As soon as I heal Im back at it!