Easton turned 9months old on June 19th. It’s been a whirlwind month for us, with Father’s Day, the end of Tony’s  school year, and getting ready for our big trip to Chicago. But, in the midst of every day challenges and excitements, Baby E was making some bit strides in becoming a little more grown-up. Here are nine tid-bits of Easton’s ninth month on earth… 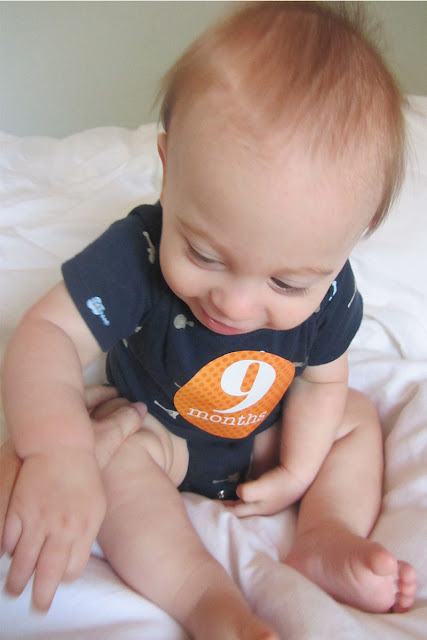 1.     Easton bleeds, and bruises. Now that E is getting around with the speed of light, he tend to ding himself up a bit- especially when he starting to get a little tired and clumsy. He gave himself a bloody nose on my friend’s hard wood flood. He just rammed his little nose right on the floor. Poor little guy.

2.    Easton crawls on hands and knees. In his eighth month of life, Easton mastered the skill of “army crawling,” but it wasn’t until nine months that he started to use both hands and knees. A very important distinction, I must say. He is getting around a lot faster now! 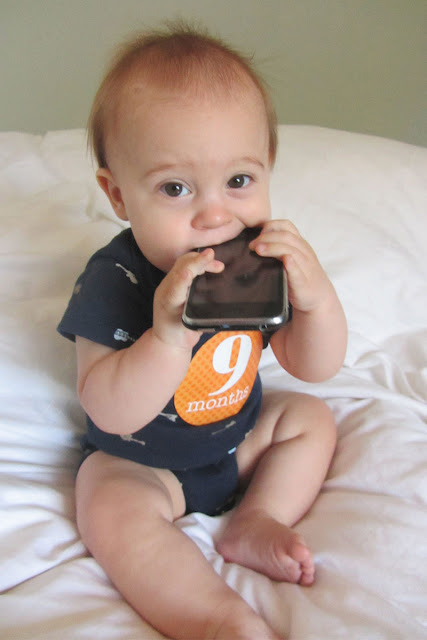 3.     Easton’s favorite toys just happen to be those “no-no/off limits” things…you know, like cords and outlets. For some reason, this child just goes right for lamp cords. When Tony gets home from work he is always stunned to see cords draped over curtain rods (just my little way of keeping them out of reach). One time, he nearly pulled a lamp down on his head- luckily, mama caught it just in time!

4.    He can get a little cranky. Between three and nine months, Easton was the most chill, light hearted little baby I’ve ever seen. Once he hit nine months, he learned how to cry a little bit to get his way. He’ll just sit on the ground and start to cry….I mean, for no reason. That’s new. Luckily, it doesn’t happen often, but for a solid week it was a common occurance in our house. 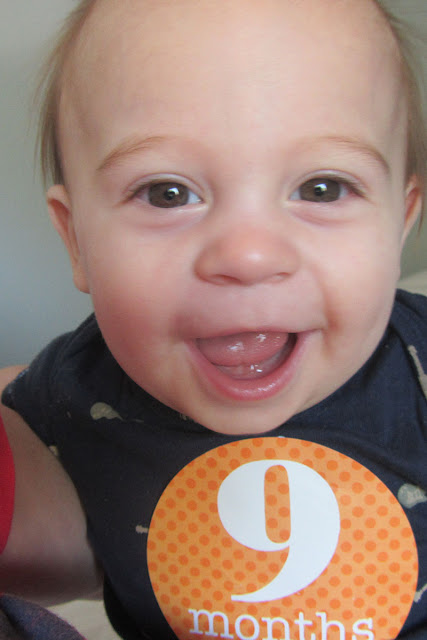 5.    He had one instance of “stranger” fright. He is handed off to people pretty easily, but one evening he got a little upset when I handed him off to my friend’s fiancé. I’m not quite sure why it happened, but ever so slowly, Easton’s lip started quivering, his eyes lids started to open and close with a quickness, and all of a sudden he was in an all out sob. Poor Joe must have thought he did something wrong….(he didn’t :)

6.    He eats with his fingers (more than just puffs). I have gotten a little bit away from spoon feeding E and I’m trying to encourage more hand to mouth eating. Puffs (like cheerios) are pretty easy to get in his mouth, but slippery things like bananas and beets have taken some getting used to. But, he’s doing a great job! And, I think he’s really enjoying the independence of feeding himself. 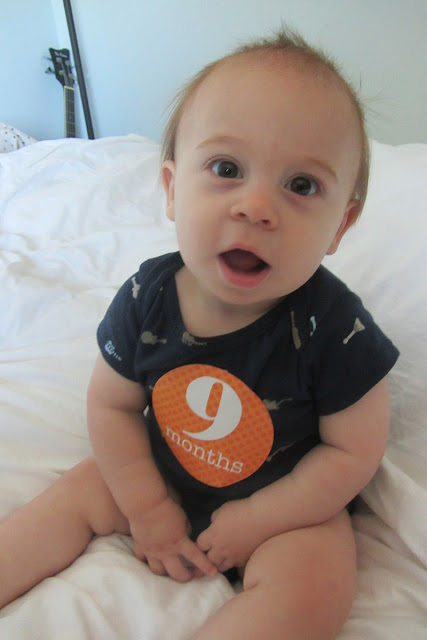 .    He can go down to sleep with Daddy (and well, too). On Tuesday and Thursday nights I am taking a self defense class (how cool is that?!?!!) and Tony is responsible for putting Easton to bed. I was a little nervous at first, but Easton is going down just fine with his Daddy! I think it’s great for him to get used to going to bed without his Mama, anyway. It gives both of us a little independence from one another. Independence is always a good thing.

8.    He has two teeth. His two bottom teeth came up at exactly the same time. One weekend when Tony was away on a camping trip, Easton decided to start teething. He was up every hour to hour and a half, three nights in a row. It was exhausting, but at the end of it, E had two little teeth. So cute.

9.     His favorite word is still “mama” (thank goodness, my ego wouldn’t be able to handle, otherwise.) He is getting a small repertoire of words, but his favorite and most often used word is still “mama.” He also says “dada,” “hi,” and “hi there.” Oh, and he says “de-de” which, in Turkish means Grandpa. So…he also speaks Turkish J 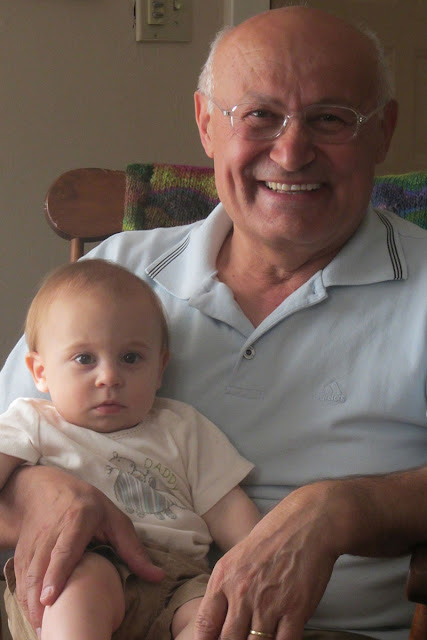 We were lucky enough to spend some time with my brother-in-law's parents (who are from Turkey). This is a picture of Easton and "Dede" ("grandpa", in Turkish)

Cutest nine month old around! And quite the chatter box it seems... if he's starting in on the words now you're in for lots of fun!! Have a fun trip - can't wait to see you and Mr. E when you get back!

What joy to see Easton at 9 months. The pictures are adorable. Can't wait to see you all.