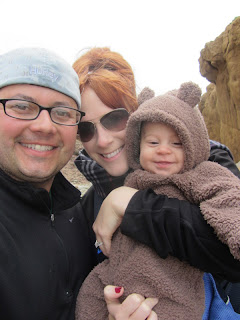 My darling husband gets a week off every year in February. This comes at the perfect time, because we are always looking for fun ways to celebrate our anniversary- which happens to fall (usually) right smack-dab in the middle of his vacation. This year we took a little trip down the coast- we had a little bit more baggage than in years past, namely- Easton. Easton and all of his tiny little clothes, car-seat, carriage, bassinet, and play mat take up far too much room for such a little person....but that's all part of the fun! 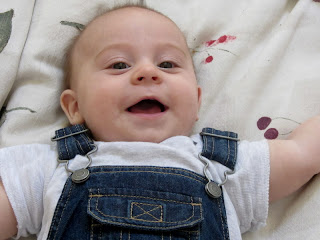 I felt that overalls were the perfect outfit for Luxury camping :) 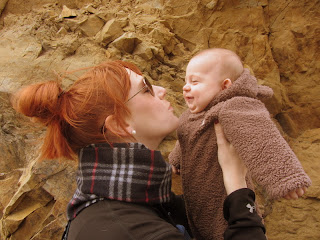 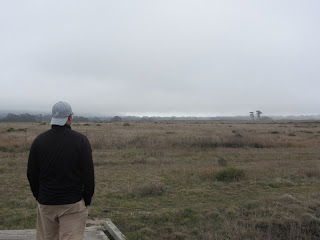 We had a great time at Costanoa which is right in between Santa Cruz and Half Moon Bay-. It's a luxury (type) camping experience- complete with a nice restaurant, spa, tent bungalows, cabins, and a Lodge. We stayed in the Lodge. That's about as close as the Frascone's get to "roughing it." (Though, to tell the truth, I really do love to camp. It's my precious little Tony that hates it.) We had a fantastic time on our little "holiday." We took walks, I got a massage, Tony utilized the Jacuzzi, and we watched movies and ate peanut butter and jelly sandys. 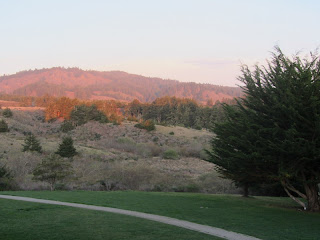 The picture above is the view from our room- quite nice to wake up too :) 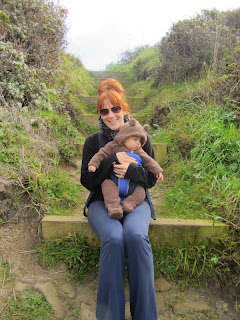 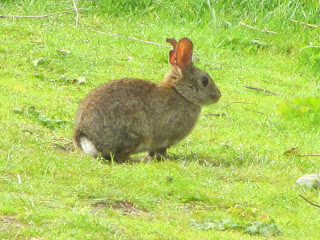 This is a pretty little bunny that we got to know well- he has a home in a bush, that Tony wanted to look into- I told him NO.

On one of our walks down to the beach, we discovered an elephant seal on the shore surrounded by seaweed. As soon as I noticed him, I decided that he must be beached and would die if we don't get help...NOW. So Tony ran the two miles or so back to the Lodge to get the phone number to call a ranger. He got a little oceanography lesson from the ranger, who told him that male elephant seals beach themselves because they get so exhausted from mating. In other words, he isn't in any danger and we were not going to be the saviors of this great beast. :) 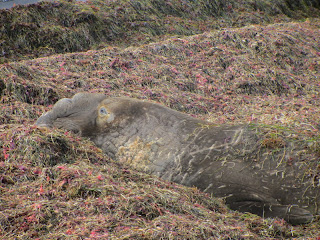 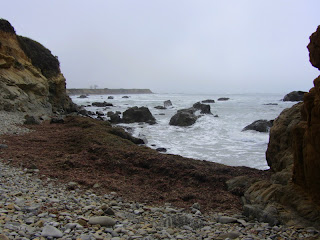 I'm not going to lie- the whole time that Tony was away in search of a ranger, I was dreaming of grandeur. I thought for sure, that I would be responsible for saving a life that day. I might make the news, I thought. Nope, no need for news cameras. This elephant seal was just doing what elephant seals have been doing throughout time. I must have missed that day in school when we learned about such things.Well, it's a good story, anyhow.

We left Costanoa with plans to return soon- and maybe even find our Elephant Seal friend. I really do think he liked us. We hung out with him on his beach for over an hour...we named him Hank. 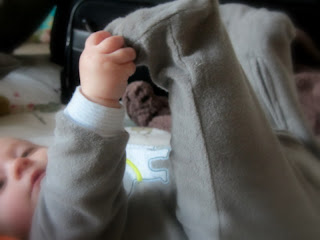 Email ThisBlogThis!Share to TwitterShare to FacebookShare to Pinterest
Labels: Trips