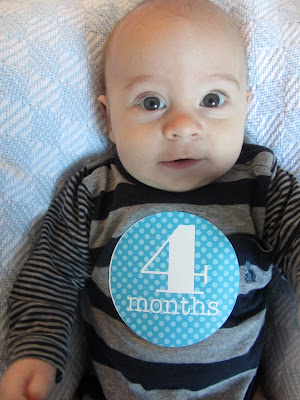 I'm a little late on this 4 month write-up. Let's just say, time flies when your having fun. I am so in love with life as a mom to ma boy, I can't even stand it. The month between Easton's 3mo birthday and 4mo birthday was packed full of "baby's firsts." In this month, Easton began to grab objects and play with his little hands (his favorite animal to grab in was a "circus monkey" that hangs from his play mat).  He started to make noises that have consonants in them, like "aaahhhGGGoooo." So cute! He had is first long sleep stretch- which was more of a gift for his mama than him- (I firmly believe that a "good night" make no difference for him but makes all the difference for me). The little monster also discovered his ears this month- he goes to grab them all the time, and I happen to think it's the cutest thing ever (and no, he does not have an ear infection).

Easton got his first cold in the fourth month of his life, which was heartbreaking for us. It really is hard to see your tiny little baby cough with all his might- but he got better in no time, and I helped the coughing (I think it was me) by rubbing Vic's Vapor rub on his feet and a small amount on his chest just before bed. We put a humidifier in his room, and stood in the bathroom for 15 minutes, three times a day, just praying that the warm steam would help his little cough. It did. Either that, or the stinkin cold just ran it's course. I'm okay with both scenarios. 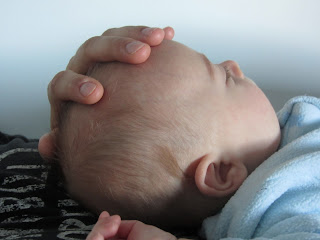 In the fourth month, Easton was baptized- something that Tony and I had been looking forward to since before he was born. It was beautiful and wonderful, and most importantly- it was at the church where I was baptized as an infant, and we had friends and family there, supporting our baby boy.

Easton also had a special visit from his Great Granny Hazel, and his Grandma Lynn. We all went visited and went on a hike in the woods, which obviously, Easton loved :)

Day to Day Schedule:
Easton and I really began to develop a schedule this month. We wake up around 8am, I feed him and then put him in his swing to hang out while I go down and have breakfast. He stays in his swing for about an hour- playing with his hands, grabbing at a rattle, and napping. During that time I usually read the news, do a devotional, finish my coffee, eat, and send some emails off. This swing routine happens EVERY DAY, and I love it. I love giving him the space to be "okay" on his own and I love that I get to start my day with a little "me" time. Win, win.

After his second feeding of the morning, we get out of the house for a few hours. I usually meet up with a friend for a walk or hike, or I workout on my own. I love that I am exposing Easton at an early age to my daily workouts. It's not only important for him to see his mama making a commitment to health, but I believe it builds character. It's an important lesson for a child to be able to sit patiently in a stroller for an hour or so and understand that the whole day does not revolve around him.

We are always home by 2pm, so that I can put my little monster down for a nap. He usually sleeps from 2:30-4:30 or 5pm. Yes!! I'm able to use that time to clean, cook (at least a portion of dinner), and get laundry done. I'm so blessed that this child has been taking long naps.

Dad comes home around 6:30 most nights, and I finish dinner while the boys play. After dinner, Tony takes Easton up for a bath. Those two boys have been bathing together almost every night since he was born. It is such a special bonding time for them- I get teary just thinking about how cool it is that they have a "thing"- just the two of them. Easton is a crazy man in the bath. He absolutely loves the water, and kicks his little feet so much that we have had to put towels down to keep the floor dry. He is a little fish, which is why I signed him up for his first water-babies class at a swim school in the area. He loved his first class- and looked ADORABLE in his little swim dipe. 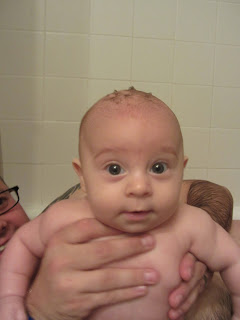 We put Easton to bed around 10pm. Yes, that is pretty late, but it's when the little guy gets tired. We tried to put him down earlier and he just doesn't go to sleep. He sleeps in his nursery and has since about a week before he turned 3mo. I put him to bed while he's awake and listen while he talks to himself for 5 minutes or so- then, he's out like a light. I rotate between putting him on his tummy and swaddling him and putting him on his side.

During his 4mo checkup, Easton got 2 vaccines (we are doing an alternate schedule, so I will be taking him in more often- but he won't be getting as many shots at a time), he weighed 14 lbs 2 oz and was 24 in. His weight is in the 34%tile, and his height 20%tile. His head is quite small (like his mama's and daddy's) and was the 3%tile. Yes, that means that 97% of babies his age have a head that are bigger than his. Hilarious.

So, that is Easton's fourth month of life in a nut-shell. This mama is so happy, so blessed, and so very content. I am more in love with my husband because of what an amazing dad he has turned out to be, I am in awe of the gift that Easton is, and I am so extremely in love with my little family. It was a good month. 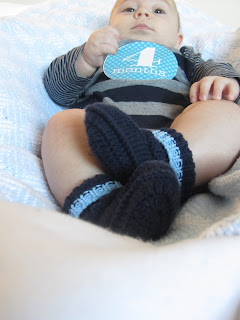