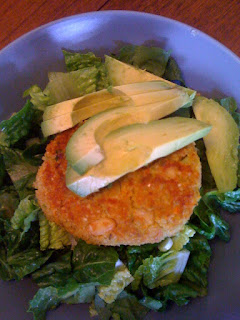 Almost immediately after I found out I was pregnant, I became "icked" out when handling meat or poultry. The icky feeling didn't go away after I had Easton, and I have started to eat less and less meat as a result. Luckily, I have a hubby who eats almost anything I put in front of him- and he enjoys it, damn-it. I have started incorporating much more vegetarian and vegan dishes into our dinners, and have had loads of fun trying out new and fun recipes. Here is a recipe that I did yesterday for lunch- it was completely amaze-balls.

Email ThisBlogThis!Share to TwitterShare to FacebookShare to Pinterest
Labels: Food

handeling meat is rough on me right now. I cant touch or look at raw chicken it was the same way with Aiden. I too slowed down on the meat after I had Aiden. It wasnt till I married Jake that Meat became a staple again. Jake has to do all the handling and prepping of chicken right now, its just too much for me to look at!