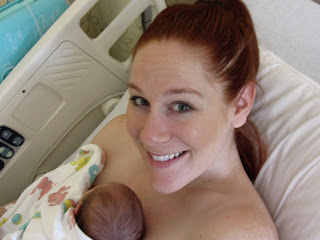 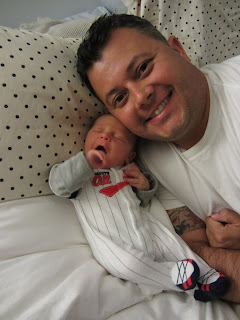 Well this is actually the beginning of week three with my little Easton, but I thought I would write a quick blog on how my first week went with my baby.

Tony and I pushed to be released after twenty four hours of Easton's birth, mostly because we had been in the hospital almost a week and were tired of being there. We ended up leaving the hospital in our car about 35 hours in to our baby's life. This was both a relief and probably a mistake. I was completely exhausted (as most new mothers are) but the exhaustion was made worse by four days in hospital prior to his birth. I was having a really hard time feeding, and probably could have used one more day with 24 hour access to a lactation consultant.
The first night was....super tiring. Tony and I were encouraged to supplement my breast feeding with formula because Easton had lost close to 10% of his body weight in the first 24 hours. Had he lost any more, he would have had to stay in the hospital. So I reluctantly put him on formula. The feeding schedule went like this: I would breast feed for 15 minutes then Tony would finger feed the baby with formula (the formula was in a syringe attached to a thin tube that would go in the baby's mouth on top of Tony's finger- when the baby sucked, Tony would slowly administer the formula), and while Dad was feeding I was pumping. 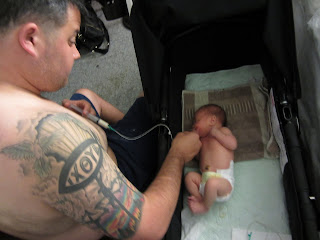 This was hard for two reasons: #1, I was devastated that I had to give my child formula- as every book, blog, and not to mention the American Pediatrics Association advocate EXCLUSIVE breast feeding. But, we had to do what we had to do. #2, I was JEALOUS. I was trying so hard to feed my baby and it was not working out well. I needed to learn how to breast feed and Easton needed to learn how to breast feed. I was impatient and crying. Easton was impatient and crying. Then Tony's turn to feed would come- Easton just ate. Easy. Well, I didn't like how easy feeding was for Tony. I wanted it to be that easy for me, and most importantly- I wanted to be the one providing food for the baby not Tony and not formula. 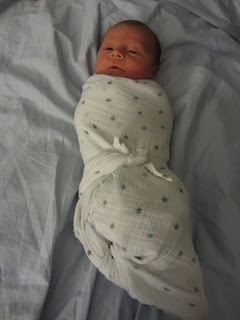 Breast feeding eventually started to work and the day that my milk came in, Easton started eating like a champ. I began to pray before feedings, asking God to come into our time and give us both patience and calm. Prayer (as usual) was so helpful and I truly began to feel God's presence while we worked on feeding.

My sister stayed over the first two nights post hospital and helped by giving us a break so we could sleep a couple of hours in between feedings. Thank goodness! That kept both Tony and I relatively sane.
We exposed Easton to the sun by recommendation of my mom's friend (who is a L&D nurse) to prevent jaundice. It was so cute to see his little body sunbathing. 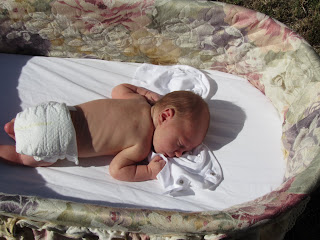 Preventing jaundice by basking in the sun. 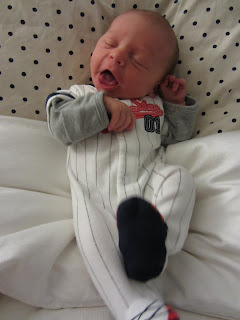 I have to admit- the first day home I literally walked around the house crying. ALL DAY. I could not get a grip. I believe the baby blues were in full swing. My poor Tony did not know how to handle me, but he was great and extremely patient.
This is what I learned in my first week. Babies cry and so do moms. I didn't feel that incredible bond that everyone talks about, right away. That feeling of bonding came as feeding became easier and I'm sure will continue to develop over the next 18+ years. The fear of losing my bond with Tony was far more overwhelming than having a newborn...I even got upset when Tony thanked God for his new job and Easton and didn't include me in the prayer. Yes. I said it. I was jealous of a prayer shout out. And the greatest lesson I learned in my first week- I have done and probably will continue to do many things that I swore I would never do with MY child.
Here are some of those tid-bits I was never going to do:
In the first few days I gave my child formula- before I had Easton, I believed that formula was possibly was made by the devil. I put a passifier in my child's mouth- I was NEVER going to use a passifier for a number of very well intentioned reasons, which all flew out the window the first night that he was wailing for NO APPARENT REASON. And finally, I let him fall asleep in the car seat. And my arms. And the bouncy chair. And a million other places other than his crib/bassinet. (That is something I am regretting a little bit, and starting today I'm putting him in the bassinet as soon as he falls asleep so he doesn't get used to sleeping in elevated positions. Obviously within reason, as he WILL fall asleep on those rare occasions when I'm not home and can't put him on his back.)
The final piece of experience that I will share: it is really, REALLY hard to go from pregnant to not pregnant. I'm gonna to keep it real. I liked the attention that I got from Tony and everyone else- especially at the end when I was put on bed rest. I got LOADS of attention. I wasn't expected to do laundry or dishes. I was not allowed to carry groceries or even go grocery shopping. I was given optimal attention 24 hours a day. As soon as I had the baby....the attention went straight to Easton. All of a sudden I was expected to not only carry the diaper bag, but the car seat and baby too. That was by far the greatest adjustment that I had to make. Just being honest. :)
That is my first week in a nut shell. Things have changed every day...and I'm trying to go with the flow, at least as much as this control freak can....
Posted by red hippo at 11:23 AM

Oh hunny....this was hilarious! I remember always saying..."I will never do that with my baby!" any most things i did do. It happens and its a wonderful learning experience. Motherhood teaches you to take a step and look at things from all angles and to not judge anothers life. You dont know what goes on at their house, in their heart or in their mind.
Dont worry about not having the initial bond or having crying fits. I was like that too. I knew that I loved Aiden, and I went through the daily motions or taking are of him, but i felt distant. One night, 3 weeks in, at 4 am i was nuring him and he reached up and touched my face and I looked in his eyes and the love and emotions flooded in my heart. Good luck!

Reading this feels like I wrote it 10 years ago. I felt the exact same way you do. But like the comment before stated it will all come. The connection and a routine for everything. It is a great experience and I miss it very much now that my girls are 8 and 10. Just remember the tough time wont last long. And as for crying fits if you didn't have any I would think something was wrong, it happens to almost everyone. Just knowing that you and your baby are healthy and that your spouse is patient is really a blessing. Take care