The Dirty Dozen: Food You Should Buy Organic 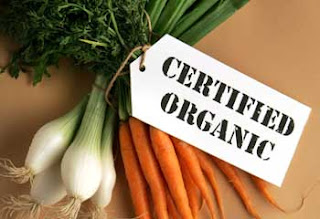 Today, American's have food options all around us. It seems that the "in-thing" is buying organic....people are buying everything from organic meat and fruits to organic cookies. Grocery stores like Whole Foods, Trader Joes, Lunardi's, etc. are becoming a major part of middle class culture. The problem is this: not everyone can afford the all-organic life style. What are the MUSTS of organic foods, and what foods can we place less emphasis on buying pesticide free?

I have compiled a list (with the help of thedailygreen.com) of the most essential foods that you should buy organic. Every year The Environmental Working Group determines which foods have the highest amounts of chemicals and pesticides- and The Dirty Dozen list is updated to help consumers make safer food choices. Here is 2010's list with some explanations from me as to why these foods are on The Dirty Dozen.

The Dirty Dozen:
1. Strawberries- strawberries can have as many as 59 pesticides on them. The skin of strawberries naturally suck up these chemicals, so washing does very little to help.

2. Apples- apples are typically grown with the use of poisons to kill off bugs and fungi. These pesticides penetrate the thin apple skin and washing and peeling does very little to eliminate the consumption of these chemicals. Apples are often times sprayed after picking to create a shiny gloss that make them more appealing to consumers....YUCK. As many as 42 different pesticides and residue have been found during tests on apples.

3. Bell Peppers- bell peppers have extremely thin skins which offer little protection from chemicals, as many as 49 pesticides have been detected during testing on these veggies.

4. Celery- celery has NO protective skin, so chemicals are nearly impossible to wash off...64 different pesticides have been detected during testing on celery.

5. Blueberries- blueberries, (while full of antioxidants) are one of the dirtiest berries on the market. Tests have shown that they are treated with 52 pesticides!

6. Potatoes- these veggies have been determined to have nearly 37 pesticides, even domestically grown.

7. Grapes- imported grapes have a much larger risk of being more heavily contaminated than those grown domestically...with that said, grapes have very thin skins and offer little barrier to the pesticides that are sprayed during and after they are grown.

8. Cherries- locally grown or imported, cherries have a dangerously high number of pesticides sprayed on them (42) if they are not grown organically.

9. Kale- (I'm not a huge fan of this leafy green, BUT....) kale has been placed on the top 12 dirty dozen this year because it has seen a huge rise in pesticide spray.

10. Spinach- spinach has been treated with 48 pesticides, recent tests have shown.

11. Nectarines- nectarines have very fragile skin and offer little protection from chemical treatments. 2010 tests have detected up to 33 different pesticides on this fruit.

12. Peaches- like apples and nectarines, peaches are one of the dirtiest tree fruits. Tests have determined that 62 pesticides are sprayed on peaches.
Posted by red hippo at 12:34 PM

so knowledgeable Rebecca...the only one I knew about were strawberries...thanks for sharing!!